A short history of Tea

First of all it should be remembered that by the term Tea we refer to an evergreen plant belonging to the family of Camellias. In particular, of the about 80 types of Camellias, only two are used to prepare our beloved drink:

Ever since ancient times, the populations of those places have used the camellia leaves, even though often in very much different ways from what we are used to doing nowadays in the West.

Employed in Chinese traditional medicine as early as 3000 years ago, tea only spread around the III century thanks to some Buddhist monks, becoming “official” beverage during the Tang Dynasty (618-907 AD). During the Song Dynasty (960-1279 AD) the Chinese art of Tea was further improved and made its appearance in Japan, where a Tea ceremony, known as Cha no yu, was developed in the XVI century.

Europe had yet to wait until 1610, when the West India Company introduced Tea first in Holland, then in France and finally in England and in the rest of the Continent.

In the XIX century Tea became the English national beverage, so popular that the crown established the first plantations in India, followed by those in Ceylon (now Sri-Lanka) and in the British colonies in West Africa.

All types of Teas are obtained from the leaves of the same plant, but, according to the processing method, they can be grouped into 5 main categories: 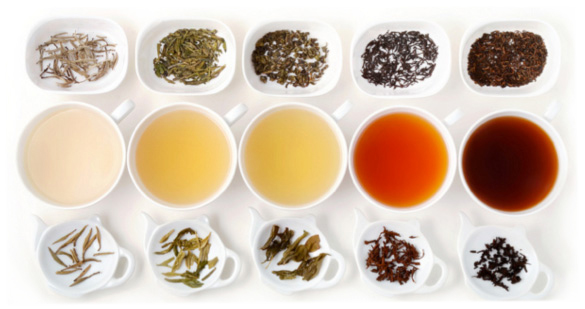 In the manufacture of White Tea the leaves go through a withering stage, which also causes a slight process of  oxidisation, followed by a final drying at low temperature. It owes its name to the colour of the bud sets of the variety of Camellia Sinensis, typically used to obtain this type of Tea, which are covered by a white down, particularly thick.

As for Green Tea, after picking the leaves undergo a heat treatment that inhibits the enzymes responsible for the oxidisation and, therefore, helps the Tea retain its green colour. This can be obtained by pan roasting, as is the case of Chinese Green Teas, or by steaming, as for Japanese Green Teas.

The manufacture of Oolong Tea stands in between the one used for Black Tea and the one for Green Tea: after wilting the leaves are subject to a slight oxidisation, which is stopped by a process of thermic stabilization. Once they are softened by heat, the leaves are then rolled and dried. According to the degree of oxidisation, the Oolong Tea will be closer to Green Tea or to Black Tea.

In Black Tea the leaves are left to “wither”, so that the water they contain evaporates. Later they are rolled for about one hour, in order to break the cellular membranes and let moisture come to surface. The leaves are, then, subject to oxidisation, when they are laid in chambers with wet atmosphere and a temperature of about 30°C and stay there for some hours. After this process they are finally dried.

Red Tea or Pu-Erh is a kind of Tea that undergoes a process of post-fermentation in particular conditions of temperature and humidity. It is solely manufactured in China.

Some statistics about Tea

Every day over 3 billion cups of Tea are drank in the world!

The chemistry of Tea

There are many chemicals in a leaf of Tea. Here are some of the most important: 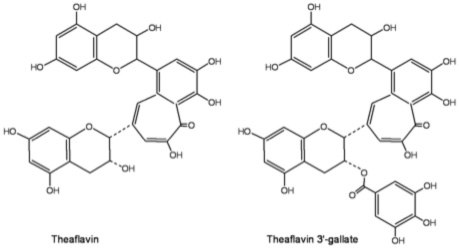 Tea contains about 2 dozens of aminoacids among which the most important is, surely, theanine, responsible for the transmission of the flavour of Tea. Theanine, among other things, contributes to reduce the stimulating effect of caffeine.

Tea contains a considerable amount of catechines, having antioxidant effects (they contrast the action of free radicals). In Black Teas the processing modifies  the composition of catechines, turning them into theaflavins and thearubigins, responsible, respectively, for the fragrance and the colour. The Teas with the highest percentage of catechines are the green, the white and the oolong ones at low oxidisation.

The quantity of metilxanthines (caffeine, theobromine and theofilline) varies according to the type of Tea, the temperature of the water used and the length of brewing. Black Tea contains, on average, more caffeine, while the other two xanthines are contained in highest percentages in Green Tea. The amount of caffeine varies from 1 to 5% of the weight of the leaf (from 20mg to 50mg of caffeine in a cup of 150 cc). An adult can take as much as 400 mg of caffeine a day, without risking cardiovascular diseases and changes of mood. Alkaloids have, certainly, contributed to the spreading of Tea in man's habits ever since ancient times.

Tea leaves contain beta-carotene (turned into Vitamin A from the liver), Vitamin E, Vitamin B1, B2, B6 and Vitamin C. They also contain: Potassium, Fluorine, Zinc, Iron, Calcium, Magnesium and Manganese.

The Benefits of Tea

As early as ancient times Tea was considered, in China, a plant with healing effects, and it can't be denied that just these therapeutic properties contributed to its spreading all over the world.

Let's have a look at the benefits of the most important compounds of Tea: one is caffeine, that, by reducing sense of exhaustion, acts as a stimulant on our mental faculties. It also improves renal circulation, stimulating, thus, diuresis.

Catechins have the following properties:

The vitamins and the minerals contained in Tea are:

In order to obtain a good cup of Tea, it is important that the leaves are of very good quality and that the preparation follows a few basic instructions, that vary according to the kind of tea used.

Unless differently specified, water temperature at around 90° is perfect for Black and Oolong Teas, whereas for Green and White Teas it is better not to exceed 70°.

As for steeping time, Green Teas require about 2/3 minutes, Black and Oolong Teas about 4/5 minutes, while for White Teas we can wait even up to 6/8 minutes. In case of rare or top quality Teas it is advisable to effect multiple infusions.

As for the quantity of leaves to be used, 2 grams (a teaspoon) are enough for an average cup.